The Art of Dying 5


The New York Open Center’s conference, provocatively titled, was an amazing experience. Rather than being about the process of dying, this conference offered stimulating investigation into the nature of reality and consciousness, asking the question, “Does consciousness continue after death?” Different viewpoints were explored – the Tibetan Buddhist view was represented by Robert Thurman and Kunchok Gyaltsen, a Tibetan herbal doctor. Thomas Moore talked about care of the soul, which he believes continues eternally.  Rabbi Simcha Raphael gave a lively talk about the transpersonal, Jewish/Kabbalistic view which had similarities to Tibetan teachings of the Bardo. Henry Fersko-Weiss gave a beautiful presentation on bringing the sacred back to the deathbed as he talked about End of Life Doula training.

While I have never been personally concerned with life after death, most of my clients are. There are so many different concepts; while humans have puzzled over this question for millennia no one can say with certainty that they have the answer. It is indeed hard to conceive that someone so vibrantly present can be completely absent, totally NOT after they die.  And since no one has ever truly come back to tell us, many people rely on faith and some, like me, don’t worry about it too much.

Dr. Eben Alexander had a lot to say about his near death experience and sounds very certain about what he feels is true.  It was fascinating to spend the whole weekend listening and discussing different beliefs and possibilities.  We were also treated to a scientific study on the single dose use of hallucinogens to assist cancer patients with existential dread and anxiety.  Dr. Stephen Ross from NYU Medical Center is about to launch a third study into this, which, along with a very intensive therapy model, seems to be quite effective.

Having recently left my job at the Hospice, this conference could not have come at a better time.  I reconnected with some old associates including my former mentor from my Masters program.  One of my recent colleagues joined me for a day.  New friends appeared and connected and I advocated strongly for the inclusion of bereavement work in any conversation about dying.

To decompress, two new friends joined me for a romp in Central Park where we joyfully rode the Carousel and sang in Strawberry Field. 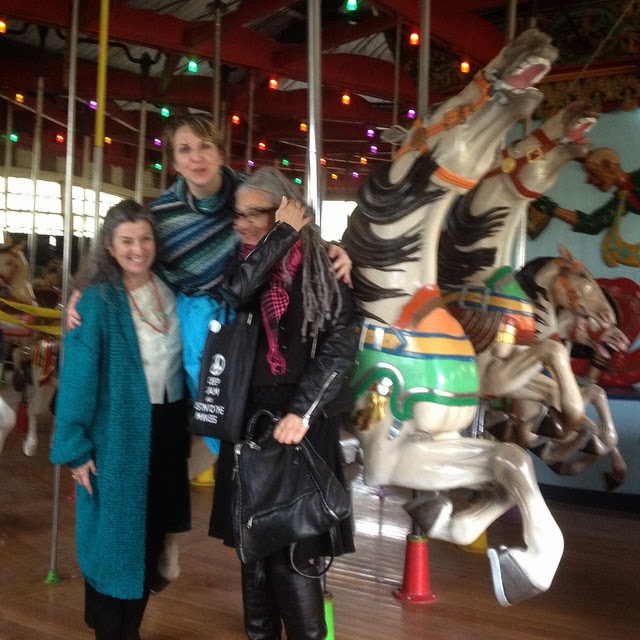 Claudia Coenen, CGC, CT, MTP
Grief shatters us and we struggle to find our way back to wholeness. My personal experience has led me to help others with their own grief. I am a thantologist (that's the study of death, dying and bereavement) and a grief counselor. I believe that we can discover gifts within tragedy and can find meaning and purpose again. My book, Shattering Grief: Picking up the pieces to become W.H.O.L.E. again will be published in the Fall of 2017 by Jessica Kingsley Publishers! The Karuna Cards, a deck of creative prompts for grief and difficult life transitions will also be available from Jessica Kingsley later in 2017.