I spent last week at the International Conference on Grief and Bereavement in Contemporary Society, which was held in conjunction with the Association for Death Education and Counseling's annual meeting. There were hundreds of people there from all over the world – scholars, doctors, clinicians, funeral directors, hospice personnel, counselors and therapists. Research was presented, panel discusses attended. There were keynote speeches on compassion and dying mindfully (Roshi Joan Halifax), on identifying at risk families for early intervention at Sloan Kettering Memorial Cancer Center (David Kissane). A psychologist from Australia, Dr. Chris Hall, spoke about the multiple government outreach programs to help the communities that suffered major losses in the Victoria Bush Fires of 2008, which had me and the woman next to me shaking our heads, saying, "that would never happen in America."

What struck me was how kind everyone was, how welcoming. Of course, everyone there works with raw pain and suffering, and has learned how to attain some balance. The compassion and thoughtfulness of attendees was palpable and inspiring. It was also interesting how many people who work in this field have come to it in response to their own experiences with death. It is one of the ways they seek to turn bad into good; to make meaning.

When I first read about the concept of making meaning after death, I did not understand it. To me, it was the equivalent of that supposedly "helpful" statement, "he's in a better place." As if being here, with our children, was not good enough? How could his death MEAN something, other than pain and horror?

Robert A. Neimeyer, PhD, is the scholar who coined this phrase, saying that it is a necessary part of the reconstruction of life after suffering the loss of a loved one. But Neimeyer is talking about living a meaningful life after this loss. It is what you DO with it. Some people start scholarships, some people plant gardens. Some people become grief counselors and name their work after a tiny word found on the top of a page.

I attended a lecture by Dr. Neimeyer at the Conference. He read a poem he had written about a couple who was in counseling with him after the suicide of their 19 year old daughter. He said that "we seek the meaning that is viable, not necessarily valid." In the process of reconstructing our lives, we come up with ways to cope, to live and to grow, yet we will always have gaps. The meaning we attribute to our lives after the death of someone we love will always have some rough patches, some areas of unsettled dissonance.

Meaning is what you make of it, I guess. While it makes little sense to me that Alby is gone, before he could see the graduations, the weddings, etcetera, our lives have meaning. Some of this sense of purpose is related to him, some of it is reaction to his death. And a good deal of the meaning we make correlates with our own growth as we deepen and mellow. Hopefully over time, this growing purposeful, meaningful life slowly becomes as valid as it is viable.
Posted by Claudia Coenen, CGC, CT, MTP at 2:02 PM 1 comment:

Buttercup in the morning

This morning I ventured out to Buttercup, walking quietly, following the path, following my breath, listening to bird song and squirrel rustles in the trees. Two deer ran across the path; two beaver stood on islands of their own creation before slipping in to the water and gliding away. I tossed a pebble into the water and watched the ripples change the reflection of the bare trees standing above the beaver dam. The geese on the other side silently swam away. 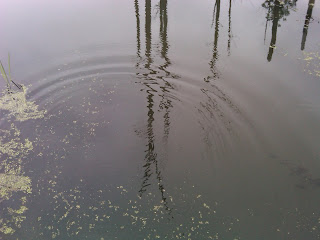 Stillness has never been comfortable for me. I am so action oriented; I want to DO rather than just BE. I want to BE something – writer, dancer, mother, wife.

This is how I describe myself, by a list of activities. There is some trepidation to claim the fullness and wholeness of who I really am, a struggling, evolving human trying to BE the best I can be. And even that is an activity – I am always trying to do something with my Being. Birds, frogs, beavers do not worry about this - or do they? They are busy building, nesting, swimming in the swampy water. But I treat my life as if it were some lump of unformed clay that I am supposed to mold into a beautiful, useful shape. I treat my losses as if they are obstacles rather than gifts for discovering a deeper way of Being. The losses, the gains are part of the shape of my life. Why do I always want to make them into something else?

It doesn't matter, really. I followed the path and my breath. I squatted on the wooden bridge and smelled the algae in the water. Bugs buzzed around my hair; they touched the water creating tiny ripples. The beavers did not return but it did not matter. I filled my basket with ferns, daisies and flowering branches. I filled my body with the sound and smells of the woodland. I walked back home, quietly.
Posted by Claudia Coenen, CGC, CT, MTP at 11:14 AM 1 comment:

This morning I woke up, fearful. This is a rather common occurrence; I wake up, not quite rested enough and my head fills up with worries. My mind spins and I feel afraid. What if this happens and then that will happen and it will be really bad and what can I do to prevent it, oh no, oh no OH NO!!

A little later, my partner said to me that he had never met anyone who was so invested in cutting through fear. He said he's seen me do it over and over; I am afraid and I cut through it with laser like efficiency. And I know that fear does not diminish courage – in fact, courage is (as Winston Churchill said) proceeding in spite of fear. Perhaps waves of grief have been replaced by rivulets of fear as my life is in flux. As I wait for the shift to take shape, the ground beneath me heaves and shakes. I desperately cast about for something to cling to when it would be better to bend my knees a little, spread out my arms and find a way to balance myself on the groundless ground.

It's a habit, he said. I guess he is right; I am repeating myself over and over. If only I could trust more – my history proves that things always work out, sometimes in surprising, unforeseen ways. But I am so impatient for the next phase to begin; I am poised on tippy-toes and waiting to jump in. Then he said, "The problem is hope. Hope and fear always walk hand in hand. Without hope, you don't have to fear anything."

This is a tough one. As a positive thinking individual, I tend to believe that having hope and intention is a good thing. But is intention the same as hope? Hoping and wishing become longing and yearning which lead to worry and disappointment when the hope is dashed or even just delayed. Intention, on the other hand, is focused and active but I always forget the second part of intention: State it clearly and then….Let it go. Lay the foundation, clarify, clear the deck, set the stage – whatever metaphor works but then….get out of the way. It comes back to trusting that, when the conditions are right, the right things will happen.

So, hope and fear do not have to be my best friends. It certainly would be more helpful not to be involved in wishful thinking and the accompanying angst. I have set my intentions very clearly. I have made the plan, the structure is in place. I have all the tools I need to shift my world. I just have to trust that.
Posted by Claudia Coenen, CGC, CT, MTP at 12:06 PM 1 comment:

Claudia Coenen, CGC, CT, MTP
Grief shatters us and we struggle to find our way back to wholeness. My personal experience has led me to help others with their own grief. I am a thantologist (that's the study of death, dying and bereavement) and a grief counselor. I believe that we can discover gifts within tragedy and can find meaning and purpose again. My book, Shattering Grief: Picking up the pieces to become W.H.O.L.E. again will be published in the Fall of 2017 by Jessica Kingsley Publishers! The Karuna Cards, a deck of creative prompts for grief and difficult life transitions will also be available from Jessica Kingsley later in 2017.